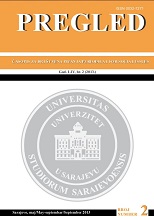 Summary/Abstract: Leadership is regarded and defined in many ways, however most of these interpretations include leader’s ability to influence followers, within different environments and situations, aiming to implement certain vision and realize a change, by which the desired progress is achieved. For so demanding role, a leader must possess a number of different personal values and abilities. Intelligence, certainly, represents one of the key values defining personality and a role of a leader in providing leading position towards followers. Apart from conventional interpretations of cognitive intelligence, the leadership theory deals with other kinds of intelligence, such as analytical, experience, and creative one. Modern leadership studies, as well as other professional and scientific areas, attribute increased importance to emotional intelligence, in the context of the fact that mankind nowadays lives faster and more dynamic. Namely, the ability of governing one's own and others' emotions, in times of increased stress and change, determines, more and more, the outcomes of different processes and explains why certain organizations fails and other succeeds in times of crises and changes. Emotional intelligence is particularly important for leadership theory and skill. Many conventional approaches used to link leadership primarily with a capacity of producing big ideas, visions, and strategies. Modern experiences, though, more and more, associate leadership, and implementation of demanding and complex changes success, with leader's ability to move emotions of his (her) followers.