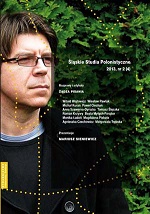 Summary/Abstract: The subject-matter of the work is letters and epilogues in "Gesta" by the so called Gallus Anonymus, especially topics they present. The author builds a multi-coloured series of topics on the basis of his own cultural awareness with very blurred references to social realities. Thus, the most important role is given to those places in "Gesta" which overcome or do not respect conventions and relatively change attitude towards them. A discussion on Gallus Anonymus intensified in the last decade, loses a lot without being re-recognised generally speaking, the sphere of literary conventions or topics. The main obstacle in clear-cut and reliable findings concerning intended and factual reception of "Gesta" can be noticed in conventions used that were often treated by interpreters as a social reality while all statements formulated by Gall cannot be literally treated.