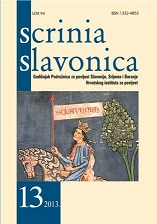 Summary/Abstract: This paper reviews economic activities in connection with the Drava River, particularly the milling industry and transportation, during the fi nal period of the existence of the Hungarian-Croatian union. Due to lack of knowledge of the Croatian literature on these issues, the author is mainly restricted to the Hungarian aspect of the topic. By analysing the transportation of goods on the Drava River by ferry boats, or over bridges, the following can be asserted: - compared to the former sporadic and low-volume shipments, traffi c increased rapidly from 1868 to 1918 ; - ships allowed to ply once again as well as the ferry boats and bridges over the Drava River created conditions for trade; - the absence of customs frontiers, as a result of political decisions, caused an increase of contacts between the Hungarian and Croatian sides (although for this reason only few data are available for present-day analysts!); - the Drava Valley functioned as a unique economic territory and the inhabitants of both sides of the river were in everyday contact. The fact that many places on the Hungarian banks were inhabited by Croatian native speakers facilitated the maintenance of economic and human contacts; - the Drava did not separate but rather connected peasants, families and villages of the two banks.