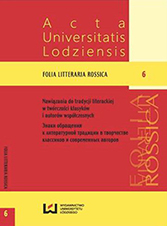 Summary/Abstract: The article is devoted to the study of reminiscences from J.-J. Rousseau’s works in the novel The Letters of a Russian Traveller by N. M. Karamzin. They are studied as an entire, organized artistic system, linked with the concept of literature shaped in Karamzin’s works in the end of 1780– 1790 years, as well as with writer’s thoughts about the other philosophical, aesthetic problems. ‘Rousseau’s plot’ in the novel by N. M. Karamzin is developing in parallel with other additional plots, which resulted in forming a forward-looking dynamic poetic manner of narration in the book.