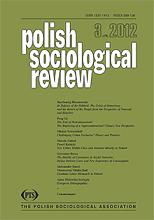 Summary/Abstract: Taking as his point of departure the London Tottenham riots, a product of a mob lacking political consciousness and postulates, the author strives to identify the fundamental deadlock (aporia) confronting western parliamentary democracy.Nowadays, collective phenomena are analyzed within a moral-economic frameworkwhich reduces the perspective on society to a sumof individuals. This contradiction is responsible for the reductionism which is leading the latest theories of social and political philosophy to the conclusion that we have reached "the end of politics" and are venturing into the "postpolitical era." According to this author, rather than describing the essence of the problem, these terms are merely skimming the discursive problem. If, as Foucault would have it, discourse is always a specific practice, the aforementioned reductionism can also be approached as a political strategy. Therefore, in order to grasp the "political" as a feature of the situation in which the people are participants, rather than in substantial terms, the author discusses the theory of development of the modern political subject within the framework of Michel Foucault's liberal "government" paradigm and Jacques Rancicre's theory of democracy as a proper political element. Drawing upon these two thinkers, he sketches the genealogy of contemporary liberal democracy, stigmatized by the increasing rift between the people's political activity and the managerial class's apolitical reproduction.