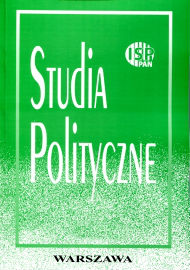 Summary/Abstract: The article presents an analysis of press items on the recent US presidential campaign as they appeared in two dailies, the New York Times and USA Today. The focus of interest is the non-voting section of the electorate, which forms a separate category, coming, as they do, under neither the usual 'Us', voting for a given candidate, nor the equally usual ‘Them’, voting for a different candidate. Floating voters, those who do not know for whom to cast their vote, or whether to vote at all, along with non-voters, form another category, the 'other Them'. The article compares them with ‘obtuse publics’, who can be observed solely by means of advanced research methodologies. The lack of visibility in the media comprises the article’s primary axis, insofar as, to a large extent, non-voters remain imperceptible, despite the existence of research analysing their silence. Floating voters, in turn, are afforded the right to visibility. This is, however, a 'stigmatised' visibility, with the people concerned being portrayed with irritation and embarrassment. The article discusses the modality of this ‘stigmatised’ visibility; the paramount question, however, remains the absence from the media of the 'missing section of the electorate', amounting, during the last elections, to over one third of those who were entitled to vote.