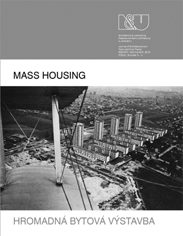 Summary/Abstract: Bratislava, atlas sídlisk / Bratislava, Atlas of Mass Housing Authors: H. Moravčíková - M. Topolčanská - P. Szalay - M. Dulla - S. Ščepánová - S. Toscherová - K. Haberlandová Bratislava, Slovart 2011, 344 p. Mass housing complexes constitute one of the largest, and often most bitterly controversial, elements in the built production of the postwar Modernist decades in many parts of the world. These often colossal estates have never sat easily within the mainstream trends of MoMo heritage, either at a national level (in government designation strategies) or internationally (in the campaigns proselytising and research of DOCOMOMO). That uneasy status partly stems from the intrinsic tensions of the original Modern Movement itself, always torn between the dashing individualism of the ‘masters’ and the collective utopias of programmed social provision. On the whole, MoMo ‘heritage’ has emphasised the former, through campaigns monographs of individual showcase-buildings and architect-creators. But of all Modernist building types, mass social housing complexes are the least well-served by this approach. In order to convey their character adequately, a far broader coverage is necessary, inventorising entire areas and deploying systematic statistical information rather than glamorous imagery. However, the sheer scale of the subject-matter itself poses enormous challenges to any published inventory project. Thus there have been only isolated attempts to inventorise the entire mass-housing ‘stocks’ of individual cities, let alone countries. The 1994 publication Tower Block: Modern Public Housing in England, Scotland, Wales and Northern Ireland, (coauthored by Stefan Muthesius and the present reviewer) attempted a basic-level inventory of all postwar multi-storey public housing in the UK, as an appendix to a monograph book on the subject. However, due to inevitable space constraints, this took the form of an extremely compressed statistical list, confined to certain basic data – original name, dates, dwelling numbers, bibliographic references, etc. – with no illustrations or accompanying maps. A far fuller treatment of a whole mass-housing ‘stock’ – albeit of a single city – was presented in the 1992 Amsterdam Social Housing Atlas. Here, a series of colour-coded district maps,cross-referenced with area lists of social housing projects, provided a comprehensive coverage, although with only limited information on each individual housing scheme. Even this limitation led to a book of unwieldy size (A3) that can only realistically be used in an archive or library. Is it feasible to produce a published masshousing inventory of an entire city, in a form that can be employed both as a comprehensive deskbased reference tool and as a portable handbook for use ‘in the field’? This, after all, was the same dilemma faced by the Pevsner Guide series in the UK, as its county volumes gradually inflated in size over the decades. In their new, Slovak-English bilingual .