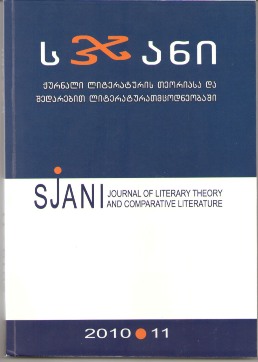 Summary/Abstract: To express painting in word matter is the case when the word with its arsenal and substance tries to present and express something which is built with quite different material. It is clear that they have co-crossing space, and there also exists the feeling of easiness of such translations. However, these translations are possible in the extent when something strange, and probably impossible from the beginning, is possible: putting of color and contour into the will of a word. And as such is difficult to be imagined, we can only expect formation of some word clones built with color and form substance, independent movement of which is suppressed and which is initially tied with umbilical cord which represents its counterpart – exists only to the extent to which the first exists, moves only to the extent in which the first gives the right, is life-giving to the extent to which it first blows life into it and, if it way be said, endows it with the right to speak on its behalf. Essentially, we deal with the symbiosis, when the word parasitizes on color and contour, and the painting finds the permit for its existence with the satzaza ellite in the communication space, correspondingly, inter-subjective, communication identity. It preserves the entire mystery of identity – which is impossible to be poured out into the communication space, and transfers time and again to the word. The communication space has its own rules and forms. It demands that everything, which has wish, should be a part of its context; first of all, it should prove it (communication reality). it should imitate it and recognize supremacy of its laws. That’s why, a work of art, in case its aim is not to prove communication exotic character, with its simple color and contour expressive frankness presents eternally strange of the communication space, which is subject to the dictatorship of its own clones. And still, there is one thing which justifies such interpretation and points that it is not only expression of the painting universe in other substance and placement into communication matrix. The thing is that the word is also an expression of the resonance, which in me through (in this case, Pirosmanish) color and contour start voicing, as new dimensions of my consciousness. If such counterpart has, or may have, any original essence, only in the extent as I prove with it existence of this resonance and thematically turn this interior space of co-crossing, in which painting and literature meet each other as co-participants, in which both painting and word have turned into my meaning and it is already difficult to determine where comes my end, where starts a painter or my word about him. All this turns into my fate exactly in the sense as everything, I have ever come across on my way, is my fate: objects, people, thoughts, events and others. It is this circumstance, which has a share in that relief outline, along which I move. In the present article we try to read Pirosmani.