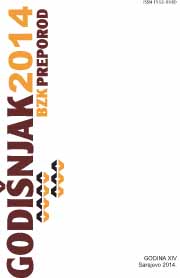 Summary/Abstract: The original study about Bosnia and Novom Pazar in the litteral opus of the sufi, mystic and sheikh of the Bektashi and Nakshbendi dervish rite, Dervish Ahmed Ali Gurbi (1698/99-1775/76) also known as Gurbi Baba. Important biographic information can be found in his poetic collection (Divan) which was, according to him, started “in Bosnia” in Hijri 1135 (1722/23), at the age of 25, what leads us to the conclusion that he was born in Novi Pazar in the year 1698/99 (Hijri 1110). From the verses written in the Divan we ascertain that Novi Pazar was in the formation of Bosnia, a place described by the poet as his homeland, fatherland, homeground, living place (Turkish: biladi; diyari). As a poet and a sheikh in two dervish rites (tariqat) Dervish Ahmed Gurbi Baba expresses his great love towards his hometown and homeland Bosnia, and also towards few Bosnian poets as Hasan Kaimi, Mehmed Meili Gurani who were his contemporaries, and probably his close associates.