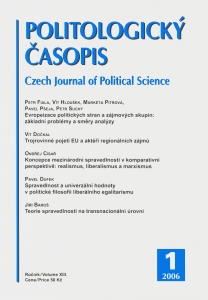 Summary/Abstract: Contemporary normative debates about justice increasingly revolve around the problem of extending the principles of justice (and corresponding theories) beyond the level of the nation-state, to which they have been for a long time confined. The article below discusses several authors from the wide and heterogenous politico-philosophical current of liberal egalitarianism, which can be considered one of the leading contemporary schools of thought, or the mainstream. There are two interrelated goals in this enterprise: First, to show how varied and cross-cutting the normative landscape of justice is, even within this specific current. Second, since I concentrate on the problem of extending the principles and theories of justice to supra-state levels, the universality (or the „cosmopolitan reach“) of these ideas stands out as one of the most interesting features of these discussions. The work of Brian Barry, David Miller, Onora O’Neill and John Rawls exemplfy many crucial issues that any theory of justice with cosmopolitan ambitions must cope with. The article concludes that the concept of (universal) human rights seems to be the only value that can buttress any cosmopolitan theories of justice; however, the normative debate over (1) their grounding, scope and corresponding obligations and (2) their connection to a comprehensive account of a good society, i.e. liberal democracy – and therefore, the acknowledged danger of ethnocentrism – is still far from being resolved.