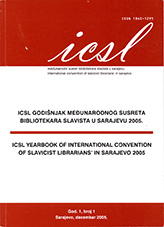 Summary/Abstract: The most famous book in Bosnia is a lovely illuminated manuscript known as the Sarajevo Haggadah. Although it found a home in Bosnia in the early 1600s, it was made in another place and time. It is a testimony to the artistic and cultural creativity of those who made it, valued it, and protected it over the ages. It is also a survivor. On at least four occasions in its long history, the Sarajevo Haggadah has survived attempts to destroy multicultural communities. Each of these attempts to eradicate pluralism was also accompanied by the burning of books.