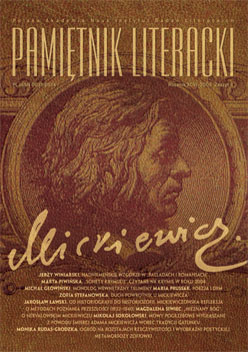 Summary/Abstract: The current paper forms part the tradition of traveling to the Crimea, during which Adam Mickiewicz’s "Crimean Sonnets" are confronted with the Crimean landscape, architecture and population. Over the course of a century and a half the situation of both the Polish travelers and the Crimea itself had changed. Every journey, especially those made by literary historians, is a specific actualization of the theme. The present paper demonstrates the change in the local color of the Crimea, from Oriental to Slavic. In its interpretation of the Crimean Sonnets the paper explores the theme of silence and the structure of what is not said. Among the things left unsaid is the presence of Russia, the various traces of which (Tsar Russia, USSR) are still visible in the Crimea today. The author of the paper combines the silences, the Oriental thread, and the poetry of the Crimean ruins with the theme of the Sonnets dramatic unease, within which she reads Mickiewicz’s fears about the fate of Lithuania.