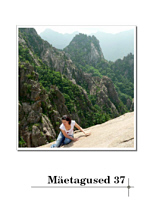 Summary/Abstract: The article discusses the structure of Korean legends as representative of female heroism, the purpose of which was to instil courage and hope in women at the time, and thereby proves that Korean legends are not merely a passive reflection of the social situation but serve an active function of influencing the society in a particular way and arranging the illogical social organisation. In addition, the article studies the heroism of Korean women in legends glorifying their beauty and dignity. In Korean legends, women are mostly perceived as passive mediators whose function is to give birth to heroes. But there are also other legends, which have been passed on throughout the long history, the nature and structure of which is analogous to European legends. Perhaps there have been other such legends, but they have not been preserved owing to the fact that the Korean society has been long dominated by men or nobility. The myths and legends are not merely simple representations of Korean society at the time, but serve as antisocial messages by shamans of the lowest social stratum, who lived under double pressure. Their message was that all people are born equal and share equal human rights, and they ridiculed the hypocrisy of the nobility, who harshly criticised shamans but eventually followed their advice.