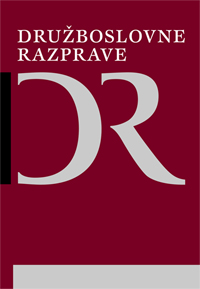 Summary/Abstract: The author analyses the coming out process and homosexual identity in the social contexts, which are defined by heteronormativity. The results of the research on everyday life of gays and lesbians in Slovenia are presented. They show that gays and lesbians as a rule first come out to their close friends, whose reaction to their coming out is mostly positive. On the contrary, coming out to parents seems to be more destructive, since it endangers the conventional expectations about children, based on the binary gender matrix. Gays and lesbians are therefore often exposed to emotional blackmailing, mostly by mothers, since coming out to fathers occurs less often. First reactions of parents eventually transform into consolation, but homosexuality often remains a taboo, which family members do not talk about. Gays and lesbians, who are out to their parents, therefore again end up in the closet, this time in a transparent closet. The author concludes that gays and lesbians organize their lives beyond the closet mostly in the social milieu of their friends and close family. Closet as a reaction to homophobic society keeps it power especially in the work environment and on the streets, where gays and lesbians most often experience violent reactions due to their sexual orientation.