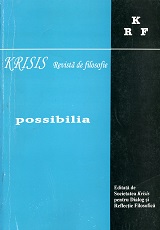 Summary/Abstract: The present paper deals with the concept of identity crisis, as it was originally created by Eric Erikson in the context of his psycho-historical researches. Starting with some reflections on the impact caused by the spreading of Freudian theories about the unconsciousness, it argues that the American psychoanalysis, also known as “Ego psychology“, have been trying to reinforce the weakened role of the Self, as global personality, trough a theory focused on the strength and the adaptive abilities of the Ego. This shift of accent give way to some startling reflections on the identity creation processes, delineating the main features of the developmental stages that undergoes every human being in his effort to find a place and an image of the sameness in society as well as in life history.