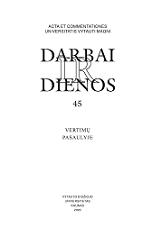 Summary/Abstract: The Late Lithuanian Chronicles (2nd–3nd decades of the 16th c.) start with a fantastic description of a voyage of noble Romans sailing from Italy round Europe to the Baltic coast. It gives one a clear indication of how poor the chroniclers’ knowledge of maritime navigation was, e.g. the Mediterranean Sea is localized in the region of the Biscay Bay. This could be accounted for by the fact that the Great Duchy of Lithuania was not a maritime state. A better description is given to the part of the voyage that went from Denmark to the Curronian Bay and then continued up the Nemunas River, most likely because it coincided with the popular trading route between Lithuania and Prussia.