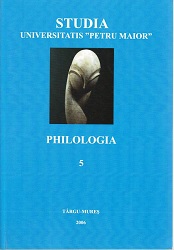 Summary/Abstract: An ironical and fantasist figure, featuring mannerism and baroque at the same time, Mircea Cartarescu voluptuously goes through the most different ages of poetry while at the same time remaining himself, in a clearly speculative approach; in the mirror of the text, the eye of the theoretician, avid for paradoxes, is constantly seen, as in a suave-allegorical palimpsest. Poet, novelist, theoretician, Mircea Cartarescu passes through the fields of literature with a remarkable ease which originates in his talent as well as in the cultivation of a prodigious memory and a dexterity in handling the language. We are dealing, in his case, with an obvious paradox: his literary nature, abundant, characterized by a shocking originality, meets, somewhere in the abysses of the being or even on its rationalizing surface, a culture which is fully assumed, with a restrained fervency with a somehow bookish devotion. The so personal tendency in Cartarescu’s texts results therefore from the collision of feeling and idea, of thinking and affection, from the coincidence of the contraries.