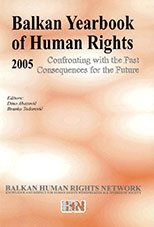 Summary/Abstract: The massacre of more than 7.000 Bosnian Muslim men and boys at the hands of the Army of Republika Srpska in July 1995 is widely regarded as being the single worst atrocity committed in Europe after the Second World War, and has been qualified as genocide by the International Criminal Tribunal for the Former Yugoslavia (ICTY). This is of course the year of the tenth anniversary of the genocide, the year in which the victims should receive our outmost respect and hopefully some sense of closure resulting from the apprehension of the suspected perpetrators, first of all Ratko Mladic.