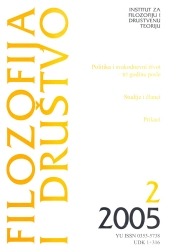 Summary/Abstract: The paper offers an analysis of the interview data collected in the project «Politics and Everyday Life – Three Years Later» in terms of three main topics: attitudes to the political sphere, change of social system, and the democratic public sphere. The analysis focuses on ambivalences expressed in the responses which, under the surface of overall disappointment and discontent, may contain preserved results of the previously achieved «social learning» and their positive potentials. The main objective was to examine to what extent the processes of political maturation of citizens, identified in the 2002 study, have continued. After pointing to a number of shifts in people's views of politics which generally do not contradict the tendencies outlined in 2002 (such as deemotionalization and depersonalization of politics, insistence on efficiency of public officials and on a clearer articulation of positions on the political scene), it is argued that the process of rationalization of political culture has not stopped, but it manifests itself differently in changed circumstances. The republican euphoria of 2002 has been replaced by resignation, with a stronger individualist orientation and a commitment to professional achievement.