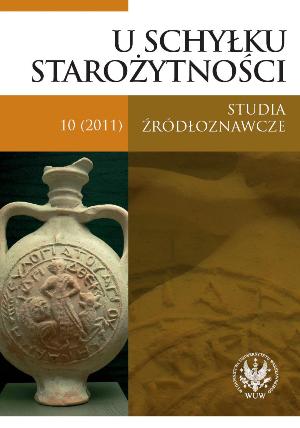 Trzeci sobór powszechny w Konstantynopolu (680-681). Od soboru do akt soborowych i z powrotem.
THE THIRD ECUMENICAL COUNCIL IN CONSTANTINOPLE (680-681). FROM THE COUNCIL TO THE ACTS AND BACK

Summary/Abstract: Despite it being the largest body of evidence for late 7th century Byzantium, the Acts of the Third Council of Constantinople (AD 680–681) have seldom been studied. However, not only do they conceal a wealth of information on this pivotal period in the history of the Empire, but they are also a useful source for understanding of the mechanisms at work at church councils. The present paper offers a close reading of the Acts and of other sources that shed light on the Third Council of Constantinople, in particular the notes of the Roman legates to the Council which are preserved in the Liber Pontificalis, and a recently published Monothelete account of the Council. The comparison of these at times divergent sources illustrates how the Roman delegation was able to impose Dyothelete doctrine on the Monothelete church of the Empire. On the other hand, it also allows some rare glimpses into the editing of the Acts, which were conceived more as an account of the victory of Orthodoxy over heresy than as exhaustive minutes of the bishops’ discussions. Thus, the image conveyed by this carefully reworked source, in which a Monothelete party is restricted to the entourage of the irreducible patriarch of Antioch, is in all likelihood biased. It will be argued that the long interruptions between the sessions, the war with the Bulgars and the revolt of the brothers of the emperor Constantine IV are all signs of the staunch opposition of the court, the army and the ecclesiastical hierarchy to the adoption of Dyotheletism. Only at the price of ten months of proceedings, which made the Third Council of Constantinople by far the longest of the early church councils, and of a bloody repression of the opposition, was Constantine IV able to make a radical breach with the ecclesiastical policy of his predecessors, traditionally sympathetic to Monothelete theology.