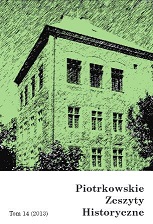 Summary/Abstract: Because of the unusual mixture of religions in Polish society during the Second Republic, military and state authorities believed regulation of religious practices in the armed forces was necessary. As part of this regulation, the army provided Muslim chaplains to provide pastoral care to soldiers of the Islamic faith. After Poland regained independence in 1918, representatives of Polish Muslims worked to create a separate military unit in the Polish armed forces for Muslim soldiers. In 1919 a regiment of Tartar cavalry was formed. On September 16, 1919, it changed its name to the Tartar Cavalry Regiment after Mustafa Achmatowicz. It served in the Polish-Russian war during 1919 and 1920. Since 1936, Polish Muslims have done their military service in the First Troop of the Thirteenth Vilnius Cavalry Regiment. The office of military mullah functioned throughout the entire existence of the Tartar army unit in the Polish Army of the Second Republic. The Muslim military chaplaincy in the Interbellum (1918-1939) is evidence of the favorable atmosphere for free religious practice within the military at that time.