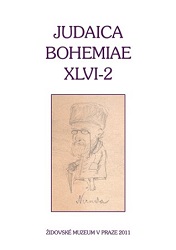 Summary/Abstract: Poet, prose writer and journalist, Jan Neruda (1834–1891) enjoys a position in the Czech literary Pantheon that only very few authors can boast of – he had already achieved fame during his lifetime and his work belongs to the core of the Czech literary canon up to the present. There is a cost, however, for this image can only be maintained by turning a blind eye to anti-Jewish passages in both his journalism and literary works. Standing out distinctly is his anti-Jewish tract “For Fear of the Jews”, first published in 1869. The present paper reviews this tract as well as other relevant sources to argue that Neruda qualifies as an anti-Semite both in terms of old prejudices and of the new political and economic agendas. He was active in creating a negative image of Jews in the 1860s and 1870s, thus making a major contribution to early modern Czech anti-Semitism. Among other things, his writings reveal ethnic targeting, derogatory descriptions of Jews and, last but not least, a call for an anti-Jewish national economy. The rest of this paper discusses the pertinent details.