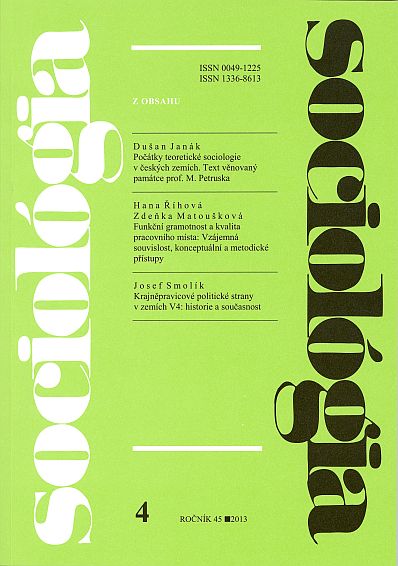 Summary/Abstract: Right-Wing Political Parties in V4 Countries: History and Present. This study aims to present the historical patterns for the contemporary extreme right and describe the current right-wing political parties in selected countries of Central Europe. For the purpose of this description states of the Visegrad Group (V4 hereafter), i.e. the Czech Republic, Slovakia, Poland and Hungary were selected. At the beginning, some basic terms will be defined, then the historical patterns for the current extreme right will be described and finally a description of particular political parties, interest groups and unregistered organizations, which can be assigned to the extreme right in the above described countries will be provided. Of these structures the most important are political parties because they - among other functions – recruit political staff. The analysis focuses primarily on parliamentary and non-parliamentary political parties and movements. Obvious are also some limitations of this text, which arise from the fact that the topic is quite extensive and the particular formations described here show a substantial dynamics. Text discusses especially political parties, which regularly take part in elections to national parliaments. The main aim of this study is to analyze influences of historical patterns of far-right in the countries of V4 and determine specific topics for contemporary far-right. Sociológia 2013, Vol. 45 (No. 4: 385-410)