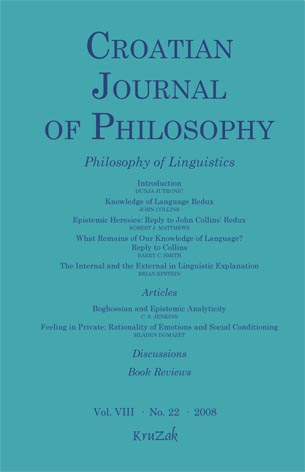 Summary/Abstract: It can be assumed that if any part of our mental life is innate it could in principle be developed in private, i.e. is not of necessity a social product. According to the argument in de Sousa (1980), emotions can be subjected to rationality assessments, making them a part, albeit special (borderline), of our ‘rational life’. Contribution of emotions to the conduct of ‘rational life’ is important, as the characteristics of belief and action most commonly associated with rationality do not provide sufficient grounds to guide an organism towards any particular course of action. By asking whether emotions (such that are still subjectable to minimal rationality assessments) can be developed in private (in a sense of Wittgenstein’s Philosophical Investigations) we are asking whether there can be any part of our ‘rational life’ that could be innate, and thus not a result of social conditioning. A brief survey of the related issue of interpretation of Wittgenstein’s arguments against private language and rule-following reveals that the issue is not whether socially non-conditioned emotions could be experienced (exist), but whether we would ever, given the absence of ‘investigation independent standards of correctness’, be able to know that they are or are not.