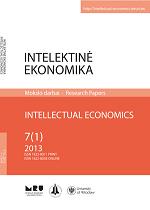 Summary/Abstract: After joining the EU in 2004 the economy of Latvia has experienced both a period of rapid growth and a deep recession. Particularly, the last crisis caused severe consequences, which was one of the deepest in Europe. The internal and external imbalances were considered as one of the main causes of vulnerability of the economy of Latvia. The global financial crisis has contributed to significant adjustments in accumulated imbalances. At the same time the reduced disparities did not mean that the economy had become less vulnerable, capable of providing stable long-term balanced growth of GDP. The article provides the analysis of the main structural problems of the economy of Latvia and main structural policy directions.