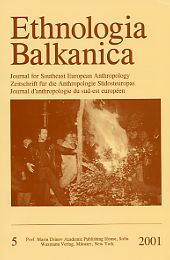 Summary/Abstract: The paper is based on the hypothesis that intercultural research in Romania is inevitably linked with the redefinition of Romania’s identity (from the inside) and image (from the outside) after the collapse of the Soviet Union and Ceauşescu’s nationalistic Communist regime. The multi-cultural constitution of the population, largely ignored outside Romania, and the inter-relations between its constituents, in the past as well as today, provide an arena for observing the emergence of this new identity and image. This process of redefinition takes place in a ritualistic way, using strong and significant symbols (flags, monuments, minorities) both for identity and for image. The main question for Romanians now is, which God to pay tribute to in the future: Decebalus, the k.u.k. Monarchy or Brussels? What is the new centre and the new periphery? In conclusion I plea for studying successful cases of interethnic cohabitation in order to help establish a regional model for intercultural coexistence. Such a model could be proposed on a wider basis (e.g. for southeastern Europe), irrespective of national boundaries and ‘foreign’ or hidden political and economical agenda.