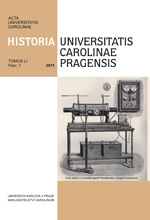 Summary/Abstract: The paper deals with the history of teaching physics for students of medicine (and pharmacy) at the Prague universities in a period spanning from the university study reforms implemented in the Austro-Hungarian monarchy in the half of the 19th century up to the forced closing of the Czech universities by Nazi occupants in 1939, with some overlaps towards the 1950s and 1960s aimed at a comparison. Development of the study instructions, arrangement and extent of the physics lectures and practical works for medics and the university teachers giving the lectures represent the focus of this paper. After the split-up of the Prague University in 1882, attention is paid to both the Czech (Charles) University and the German University in Prague. On top of that, for the inter-war period, a brief account is also given of the teaching physics for students of medicine at the newly established Masaryk University in Brno and Komenský University in Bratislava. The various and sometimes quite different concepts of and attitudes to the topic of what and how to teach from physics for university students of medicine are illustrated in the enclosures by quotations selected from the introductions and prefaces of several textbooks from the period in view.