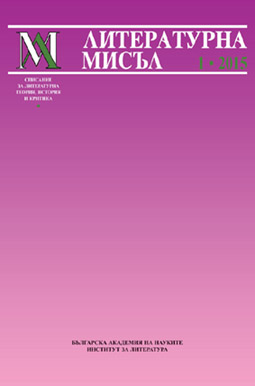 Summary/Abstract: Starting from a previous article by the author published in 1994, the present study develops two theses, one of which encompasses the other. The first thesis states that the Vazov’s novel „Under the Yoke” (1888/1889) is a total paradigmatic Bulgarian novel. Not simply chronologically the first novel, setting a classical standard in Bulgarian literature, but the novel which organically combines all genetic components of the novelness/romanceness, even mutually incompatible or opposing each other components. Two of them are considered in this study. The first is the ‘popular-carnival’ which is subliterary. Here we recall a 20 years old paper, in which the author considers „Under the Yoke” to be a popular-carnival book (according to Bakhtin), not to be a novel in the modern, „Hegelian” meaning of the term. Moving away from this original thesis, the present study is archeologising the opposite novelistic direction in Under the Yoke” – the modern-novelistic, Romantic, which is downright literary and even meta-literary in essence. In its pure form this meta-literary component, explicitly presented for a thorough discussion, is discovered in the micro-subject of ‘Kandov’. The chapters are analyzed in detail proving the key position they occupy in whole architectonics of the novel. At the end it is emphasized the complicated and multi-stratified way the modern-novelistic, bourgeois-romantic concepts associated with the novel are discussed, including in the meta-consciousness of the novel. The most important point is considered to be the justification of the second basic thesis, which is the following: By developing the ‘Kandov’ line in the mentioned six chapters, Vazov transformed in 1888 the literary substance of the Romantic into something which, a quarter of a century later, will become topical for the mainstream of the Bulgarian literary process. The „Kandov” story anticipates the essential elements of decadence and symbolist-secessionist poetics which will enter Bulgarian literature only through Yavorov and his language-Sleeplessness (1905-06). Direct linguistic (poetological) analogies are drawn between the ‘Kandov’ case and some central, constituent topoi in the poetics of the literary decadence and symbolic-secession imagery. (However – NB! – the study considers not the subjective intents of the author Vazov, but the happenings in the field of language and in the self-consciousness of the novel, archeologising the genre consciousness, including its literary-unconsciousness.) The paper, constructed as a dialectical triad, in its last, third part, considers „Under the Yoke” as a dialectical synthesis of two mutually opposing trends. At the same time it exteriorizes the problem in philosophical-historical aspect. The subject ‘Kandov’ is seen as an ideology-language hetero-interfusion – an expression, an articulation of a principal discussion, central for the Late Bulgarian Revival: ‘Bulgarian’/‘our own’ against ‘European’/‘alien’.