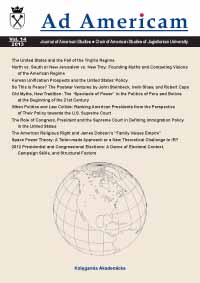 Summary/Abstract: In the early 21st century, in countries such as Peru and Bolivia, political leaders used an “arsenal” of pre‑Columbian symbols, creating the feeling of national unity and the beginning of a “new era” in a totally unique and spectacular way, and achieving the most important political purpose – the votes of the indigenous electorate and victory in the presidential election. The purpose of this article is to attempt to interpret the events that took place in 2001 (Peru) and 2006 (Bolivia) in the context of the interesting phenomena known as the “politicization of myths” and “spectacle of power,” which were used in the policies of these two countries during the election campaigns of Presidents Alejandro Toledo de Manrique and Evo Morales Ayma.