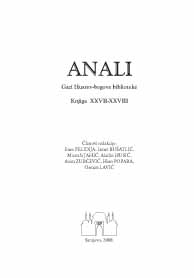 Summary/Abstract: Shaykh hfz. Nezir ef. Hadžimejlić, was born in Vukoljić near the town of Fojnica. He was a hafiz (learned Qur’an by heart), imam of the Čaršija mosque in the town Visoko, professor of kiraet in the Visoko madrasa, naqshibendi shaykh in Visoko. He spoke Arabic and Turkish. He was famous in Arabic discipline of beautiful writing – calligraphy. From his artistic performance we have two unique items of medžmua and up to now three discovered calligrapher notes written on the paper. The calligraphic note ‘’MUHAMMED’’ (pbuh) dated from the year 1893 or (h. 1312) written in thick dželi sulus letter, circle composition and in the mirror written is the name of Muhammad (pbuh). Which writings belong to the musena calligraphy composition? Apart from the note there are also decorative and symbolical elements: three five-pointed stars (symbol of naqshibendi), stylized water pot and jar with flowers. The emphasize is on calligraphy masterly writing, excellent handwriting which is in motion, powerful rhythm, letters (harf ) are involved one in another thereby enhancing the ornament. The whole composition discloses cosmic character which works as a planet, and accompanying diacritical marks as stars. This symbolic expression by esoteric learning can be related on ‘’pre-planet’’ or ‘’polar stars’’ – originally Divine spark from which whole universe was created as reflection love to prophet Muhmed (pbuh).