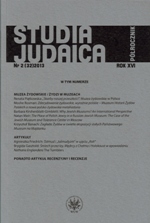 Summary/Abstract: Before World War II three Jewish museums existed in Poland: Mathias Bersohn Museum of Jewish Antiquities, opened in 1910 in Warsaw; the Museum of the Jewish Kehilla in Lviv, opened in May 1934; the Museum of Jewish Art opened in 1935 at the YIVO Institute in Vilnius. The outbreak of the war interrupted the activities of Jewish museums in Poland. The Third Reich and the Soviet Union, for obviously different ideological reasons, were not interested in preserving such institutions. The Germans confiscated the collection of the Bersohn Museum; in spring of 1940 it was carried off and pillaged. Its fate remains unknown. The Soviet occupational authorities closed down the museum in Lviv. In the years 1939–1941 the Art Museum in Vilnius continued, albeit with difficulties, its activities, first under the Lithuanian regime and then under the Soviet occupation. After the German invasion of the Soviet Union the most valuable items from the collection of the YIVO Museum were carried off to Frankfurt. The last attempt of those long-lasting efforts to preserve the national Jewish heritage was the idea of the Jewish Museum proposed after World War II by the Jewish Society for the Encouragement of the Fine Arts but it was not implemented.