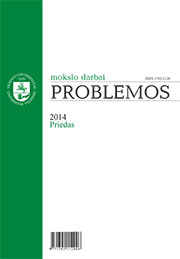 Summary/Abstract: This paper is dedicated to a critical discussion of the logical-philosophical conceptions of language that are presented in Rolandas Pavilionis’ book Language. Logic. Philosophy, its primary focus being an analysis of Pavilionis’ hypothesis of meaning as nonverbal continuous system. The paper consists of two parts. Two types of theories of meaning are distinguished and an analysis of the discussed conceptions of natural languages is proposed in the first, analytic, part of the paper: assumptions that are relevant for the philosophical semantics are identified and used for clarification of the presuppositions of the alternative semantic programme advanced by Pavilionis. Two shortcomings of Pavilionis’ semantic theory are presented in the second, critical, part of the paper. First, it is maintained that Pavilionis’ theory of understanding, which suggests taking the notion of interpretation as fundamental, is unacceptable: interpretation is an enabling, not a constitutive condition of understanding. Second, due to the lack of discussion of the epistemic aspects of meaning and the relation between concepts and conceptual capacities, it remains unclear what theoretical value can be carried by the idea of innate concepts and how can it be made compatible with externalistic aspects of this semantic theory.