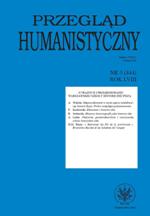 Summary/Abstract: The Nietzschean perspective was revealed with great power in the French thought of the second half of the 20th century. In my opinion, it also allows to grasp the basic dispute in which post-structuralism would be involved with the representatives of the Warsaw School of the History of Ideas if it entered such dispute. In its centre Nietzsche’s figure of Socrates could be placed and the function Nietzsche assigned to him while explaining the fall of tragedy. The thinkers departing from Marxism in the sixties and seventies of the twentieth century could choose “Socratic” path, one could think such was the destiny of the Warsaw School of the History of Ideas. Another possibility was created by the perspective of criticism of reason in the Nietzschean spirit, characteristic of French thinkers. The author wonders about the circumstances in which the choices were made.

Playing with the Sublime, or: Why Should the Theater need Lacan, or Lacan the Theater? Gra o uwznioślenie, czyli po co Lacanowi teatr i teatrowi Lacan? 2011 Psychiatria w ogrodzie (Jarosława Fazana „Od metafory do urojenia. Próba patografii Tadeusza Peipera”) From Metaphor to Delusion (An Attempt to Write a Pathography of Tadeusz Peiper) 2011 Figura ojca w polu podmiotowym Europy Zachodniej i postkomunistycznej A father figure in a subject field of Western Europe and postcommunist one 2013 STRANGENESS AND UNITY. FREUD AND THE KANTIAN STRANGENESS AND UNITY. FREUD AND THE KANTIAN 2013 Sprawa doświadczeń, czyli odpowiedź Pospiszylowi i Sowie The Question of Experience 2014
2022 © CEEOL. ALL Rights Reserved. Privacy Policy | Terms & Conditions of use
ICB - InterConsult Bulgaria ver.1.7.1201