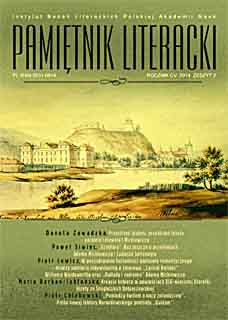 Summary/Abstract: Towards the end of 1820s there appeared two independent Polish translations of a famous qasida “Lāmiyyat al-cArab” ascribed to a legendary “brigand-poet” named Aš-Šanfarā, one of which by Adam Mickiewicz and the other, unfinished, by Ludwik Spitznagel, a young Orientalist, poet, and Juliusz Słowacki’s friend. The two translations competed with each other from the beginning of their composition. Their artistic values were compared and their degree of adequacy to the French philological translation by Silvestre de Sacy evaluated. Mickiewicz’s version was reproached for being a relay translation based on the French text, while Spitznagel, passed as an excellent expert in Eastern languages, was thought to have translated directly from Arabic. To date, no attempt has been made to meticulously compare both translations in respect of the Arabic original. The paper aims to complete the shortcoming.