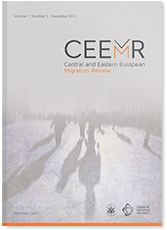 Summary/Abstract: Migration from Eastern to Western Europe gained greater political prominence and scholarly attention both before and after the 2004 EU enlargement. The EU enlargement process not only contributed to a re-integration of European countries from the former Soviet bloc into the rest of Europe, but also set up a new framework for European mobility. A variety of forecasts and analyses concerning mobility across Europe have since been conducted, sometimes providing contradictory outcomes. This process of eastward enlargement was completed in 2007 by a second round, which brought Romania and Bulgaria into the European polity, and led to unjustified fears of massive flows from the two countries to some Western states in particular, such as the United Kingdom. Academic discussion concerning the different types of mobility in Europe is, however, far from being exhausted. New issues have been raised by the economic crisis which is still sweeping the continent, by the demographic deficit affecting both Eastern and Western Europe, and by the next steps in the EU enlargement wave which will again involve South-Eastern Europe – especially the Western Balkan countries (other than Croatia which finally acceded in 2013). The aim of this special issue is to explore the variety of unprecedented processes in the field of migration which have emerged across Europe over the last decade. The papers in it seek to make sense of these processes, while trying to capture their evolving nature in the framework of a European migration system which has only been in existence for a relatively short time and which still lacks consolidated and harmonised rules.