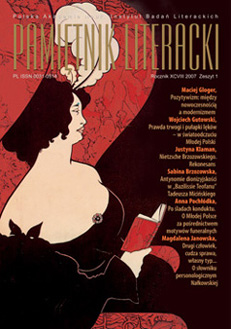 Summary/Abstract: The main figure of Tadeusz Miciński’s drama "In the Dusk of a Golden Palace, or Bazilissa Teofanu" is a 10th century Byzantine empress. In the drama she appears for the first time in the church of Myriandrion – presented as a synthesis of Byzantine sacred art, Byzantine theology and liturgy. Bazilissa’s aim is reintegration of the reality contaminated with artificiality. Teofanu believes that she is an embodiment of the Word, of the primeval, and of a myth. She is portrayed with the use of magic spells, due to which sensations are given a universal character, and she is situated between vitalism and death, between the sacred and the profane. As Dionysus and Christ, Aphrodite and Persephone, Teofanu is a carrier of ideal forms which cause yearning. Her life reminds of a subtle ritual into which basic human experience and transcending moral barriers such as promiscuity, violence, ability to homicide are plotted. Revealing the basic instincts, she builds a pre-picture of a man that is not honored with primary divinity. The key-word of the drama is the proper name Dionysus: Teofanu personifies the unfinished story of Dionysus, without a perspective of being reborn and the possibility of reconstructing the ideal universe. Her proclaiming of a god-man power fails to lead to the change of reality. Byzantium remains a figure of axiological devastation while bazilissa embodies imperfection, unappreciation, and destruction.