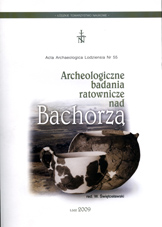 Summary/Abstract: The beginning of research on early trepanation may be considered to be the description of an Inca skull with traces of an operation carried out on a live person. The description was done by Ephraim Squier and Paul Pierre Broca in the 1860s. There have been several thousand of trepanation cases discovered since then and they come from all inhabited continents. The following paper presents a review of current information available on the main issues concerning this subject matter, putting an emphasis on the widely discussed matter of the reasons for conducting trepanations in the past. The data received from the bibliography indicate that trepanation had mainly a practical, healing purpose, and cases of operations carried out for ritual reasons are very rare. Such a point of view is confirmed by ethnographic data concerning contemporary tribes still practicing the trepanation tradition. Moreover, a detailed description of four trepanation cases from Poland has made it possible to analyze both the issue of dating the beginning of this custom as well as the elements of paleopathological description. A trepanned skull discovered in 1951 at the Franki Suchodolskie site near Kutno is great significance here. Even though today only researchers interested in the history archaeology know about it, the skull has been presented in the literature as one of the oldest, dating back to the Mesolithic period cases of operation. Information about the discovery published in foreign scientific journals was the reason of listing Poland among regions where cases of Mesolithic trepanations come from in the prestigious The Cambridge Encyclopedia of Human Paleopathology . absolute dating of the skeleton from the Franki Suchodolskie site has shown its much later origin, dating back to the Neolithic or even to the beginning of the Bronze period. A skull from Przeczyce (from the turn of the Bronze period and the Iron Age) is an example of a wrong (unfounded) paleopathological diagnosis concerning the reasons of conducting operations. Other two skulls, one from an early medieval cemetery in Bilczewo and the other one from a contemporary cemetery in Brześć Kujawski, have been presented in order to study the specification of the healing processes of large openings in skull bone, as well as a case of a typically medical, professionally performed trepanation connected with an extensive skull injury.