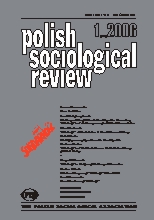 Summary/Abstract: "Solidarity" was one of the major causes of state socialism's downfall and yet it has neither come to play an active and significant role in the Polish historical memory nor has it entered a canon of routinely studied "great" social movements. This neglect is related to (1) the lack of a symbolic closure of the communist period, (2) insufficient ceremonialization of "Solidarity's" success, and the (3) the lack of public, symbolic closure of the Round Table process. A review of the literature on the problem of reconciliation after the fall of a non-democratic regime and the role of collective memory in this process allows us to argue that these three "errors" may be related to the low level of trust and the pervasive sense of corruption that are diagnosed in many empirical studies. In order to better understand these strategic errors of cultural policy we examine Poland and-briefly-several other countries where similar dilemmas were dealt with differently and, seemingly, with more success.