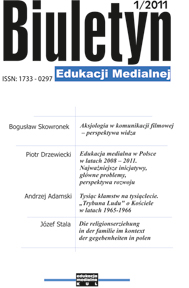 Summary/Abstract: „Trybuna Ludu” (“Tribune of the People”) in Poland during the communist era was the main organ of the ruling communist party. It realized the tasks outlined by the party. It was a tool of communist propaganda. In 1965-1966 this daily journal attacked the Catholic Church and the Polish Primate Cardinal Stefan Wyszyński. The pretext was the letter of the Polish bishops to the German bishops, which the communist government appeared as an attempt to interfere with the Polish Episcopate in Polish foreign policy. In fact, the purpose of this attack was humiliating the Church in the eyes of the Polish people before the planned celebrations of the 1000th anniversary of the baptism of Poland, which event is deemed also to be beginning of the Polish state.