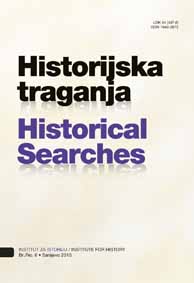 REIS I VEO: JEDNA VJERSKA POLEMIKA U BOSNI I HERCEGOVINI IZMEĐU DVA RATA
THE GRAND MUFTI AND THE VEIL: A RELIGIOUS CONTROVERSY IN BOSNIA AND HERZEGOVINA BETWEEN THE TWO WARS

Summary/Abstract: With its intensity and duration, the debate from 1928 represents one of the most important religious controversies known by the Muslim community of Bosnia and Herzegovina in the post-Ottoman period. Four basic topics around which it was articulated were the reform of waqf, the unveiling of women, wearing of hats and Kemalist Turkey. Each of these topics had its own dynamic and coherence, but all of them underline the difficulties of Bosnian Muslims to determine themselves in the process of modernisation which began in the second half of the 19th century and in the turnaround connected to the First World War. Therefore, it is not surprising that the debate from 1928 was supported by contradicting disturbances because of the future of Bosnian Muslims, which confronts two visions of the World, one which places all of its hopes into the “spirit of time” and “healthy reasoning”, and the other one which doubts the “fesadi zeman” and distortion of customs. This clash of two visions of the World seems to reflect the double folded divide which confronts the intelligence to “ulema”, one one, and to the “čaršija” on the other side. While the intellectuals were announced as the messengers of modernity, including the domain of faith, ulema and traditional elites of the čaršija seemed petrified with conservatism. But, in fact, the debate from 1928 reveals only a part about social and cultural attitudes of the čaršija, emphasizing, on the other hand, divisions within the ulema between the conservative and the reformist ulema, where the latter often found themselves in the same positions as the intellectuals, even though they never merged with them. The highlighting of relations between the intelligence and the ulema, as well as the inner divisions within the latter, the debate from 1928 reveals the issue of religious authority. This question originates equally from the role played by the jamaat mejlis in the disputing of the Grand mufti, the backward attitudes of the ulema mejlis and muftis, and the appearance of the electoral curia as a competent forum for the research of Čaušević’s statement. At last, and especially, the debate from 1928 compelled the Islamic religious institutions as a whole to determine themselves towards the new forms of public debate and individual subjectivity. Thus the role played by the press in this debate confronts these institutions to a modern public space which is coming into existence. Even the confirmation of individual right to ijtihad by Čaušević and his supporters announces the arrival of a modern religious individual.