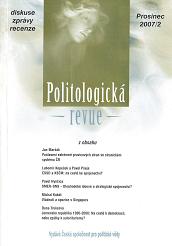 ČSSD a KSČM: na cestě ke spojenectví? Nástin souvstažností vývoje a vzájemných vlivů
The Czech Social Democratic Party and the Communist Party of Bohemia and Moravia: On the Road Towards Partnership? An Outline of Mutual Influence and

Summary/Abstract: This article attempts to analyze interrelationships of the Czech Social Democratic Party (ČSSD) and the Communist Party of Bohemia and Moravia (KSČM) and to show that these parties possess several common features in their developments. Primarily, the authors wish to present findings showing there have been moments in developments of these parties that decisively influence their further destinies and current position within the Czech party system; moreover, without these moments the parties would have been likely to have undergo different developments. The authors pay major attention to the social democrats, while comparing this party 's developments with corresponding events in the communist party. They conclude the Czech social democrats gradually assume a pragmatic approach towards the communists.