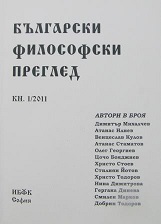 Summary/Abstract: The article is focused on the way the Bulgarian philosophers were making academic career in the last twenty years, pointing out and analyzing its most important features. We take principally as a factological base of the research the data referring to two crucial moments of the philosophers’ professional career – the successful defences of PhD theses and the attainment of academic ranks: about 390 procedures for the whole period. The typological analysis is used as a leading method that allows a bibliometric research based on quantitative data. The text starts by pointing out few common features of the system of attaining academic ranks during the post-totalitarian period - those setting the frame conditions of every scientist professional career in the country including the philosophers: unnecessary expanded scale of academic “titles”; nationalizing the activity in managing the professional career of the scientists; centralizing the attainment of academic ranks system; bureaucrizing the activity in the process of adjudging academic ranks; formalism in the evaluation process; vagueness in the way of structuring the evaluation body; nontransparency in the decision grounds of this evaluation body; anonymity of the members of the collective bodies of evaluation and irresponsibility in voting; clumsy rank attainment procedure. Three cuts are made in this research – they fix different aspects of the theme. The first cut – temporal – shows the activity of the Bulgarian philosophers during the years in connection with the career development of the college. In this process two stages can be differentiated clearly: the first one spans the last decade of XX century, the second one – the first decade of XXI century. In the end of the last century the majority of the professional philosophers were not in a hurry to make move in their career development – defending Ph.D. theses or attaining ranks – on one hand this led to stagnancy, on the other hand it limited the attraction of new faces in the college. In the beginning of XXI century the process of worsening the natural reproduction of the college of philosophers in the country was reversed. Due to the activation of the process of preparing and successful defending of Ph.D. theses and attainment of ranks works the college of philosophers was stabilized when it comes to quantity and the careers of many of its representatives got new impulse. The second cut – disciplinary – catches the professional priorities of the philosophers in our country. The priorities in the activity of the Bulgarian philosophers during the period we deal with become clear after pointing out their preferences towards each discipline according to the quantity of procedures for attainment of academic ranks. The leading ones are identified by applying a rating of philosophical disciplines and pointing out the percentage of each one of them in the field of philosophizing in the country...