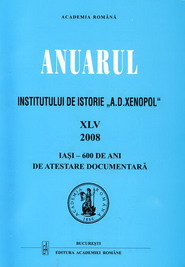 Summary/Abstract: The events in the summer of 1870 and in the spring of 1871 have generated a real debate in Romanian historiography regarding the existence in the eighth decade of the nineteenth century of a protest movement with a strong Republican orientation against prince Carol. Although here was a tendency of identifying actions which concerned the disposal of Carol I and of the whole political regime in the political confrontations between 1868-1871, such an action may not be said to have had real grounds. This was because most of the politicians in Bucharest felt in good time the negative consequences that an “action” of disposing of the prince of Hohenzollern could have had on the evolution of Romanian society. The contacts that most of them had with various leaders from the West and not only helped most of them understand at least that, after having faced a “fait accompli” between 1859 and 1866, another change of the Romanian political regime would not have been accepted. The Romanian society was experiencing several problems at that time, one of which was the lack of a dynastic feeling. After the repeated changes of princes and, particularly, after the disposal of Cuza, in whom numerous expectations were invested, it was hardly believable that a strong attachment could appear towards the one ruler who had been, starting with 1866, the head of the Romanian state. Having the advantage of belonging to a famous regnant family from Europe, but also of his intellectual and political formation in a rapidly developing country, Carol I succeeded in overcoming the numerous difficulties arisen at the beginning of his reign, resorting to a real strategy which would gradually lead him to being accepted by a large proportion of the population. By visiting several localities over the country, by offering amounts of money on different occasions, by involving in his projects people who used to support the former prince, the Romanian sovereign was rapidly becoming the fiducial point that the Romanian political class needed. That is why the political fights of 1870-1871 must be regarded, on the one hand, as an attempt of some politicians of I.C. Brătianu’s caliber to redirect the responsibilities of Carol and to involve him in the political life of the country, and, on the other hand, as an attempt of the monarch to have the chance to develop his activity according to expectations from the very moment of his enthronement. From now on, it was the role and the responsibility of the political parties to understand that the monarch could not be transformed into a political enemy, given that the prince avoid not accept the compromises of his foregoers. The government changes, the motions of censure, the resignations of some leaders must be regarded as components of a political life at its beginnings and in search of a balance that the whole Romanian society needed.