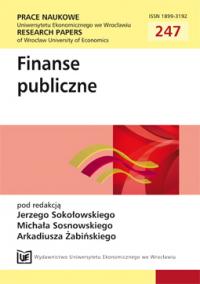 Summary/Abstract: The financial crisis, particularly strong affecting countries located on the peripheries of the European Union (PHGS countries, Baltic States and Hungary), could be slightly aggravated be tax competition for capital and labour. It can occur as harmful tax competition or centre-periphery competition, the last according to the new economic geography. The paper examines whether the limited possibility of taxing capital and labour, resulting from their high mobility, has increased the tax burden on consumption at the beginning of the financial crisis 2008-2010. Such an adjustment could be eligible for compensating the revenues downfall triggered be the decrease of capital and labour tax burden. We endeavour to assess whether the legislative changes and statistical data were consistent with this hypothesis. It turns out that this phenomenon is present, but it does not apply to taxes on labour, especially in 2010. There are also some differences in revenue responses to the financial crisis between countries from eastern and southern Europe.