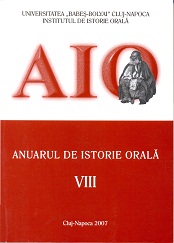 Summary/Abstract: The instauration of the communist regime in Romania meant the beginning of a difficult period of time for the different religions in our country. Although the first Constitution of April 1948 stated that the freedom of consciousness is guaranteed for all the citizens and all religions have the right to function at their choice, in fact, these statements were not a barrier for the communist party to adopt an ambiguous attitude regarding religion and especially for New Protestants. Although they affirmed that in Romania religion is not restricted by authorities, in fact, political leaders proposed to root out all the confessions considered to be anachronic, incompatible with the new social and political realities. In this study we analyzed the consequences of being Protestant in the communist regime especially in Cluj County. As one can expect, the communist regime affects in a dramatic way the Baptist believers who were vituperated even when they started school. The problems they had (at school, or during the army, or at their work) varied as intensity according to the persons they cooperated with, their availabilities to accommodate to the communist doctrine and their capacity to stand against the “obscure mentality”. Due to the intolerance specific to the communist doctrine, Baptists had to be aware and in the same time to accept the risk to be of other confession, a tolerated one but stigmatized by the communist regime.