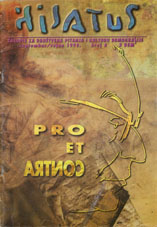 Summary/Abstract: ln the Balkans, the "sound and fury" of history has often appeared in the form of a devil. From the time one begins to talk about the political history of this land, writers, fragile human beings that are drawn into the grindstone of the patriarchal populism which manifests itself nationalistic writing. The existential failure of writer to reconcile their human understanding and their past with these nationalistic tendencies results in "schizoprenic" and "ontological" gaps between their biographies and their works. ln the example of Muhsin Rizvic's book, "Bosnian Muslims in the Andric's World" it is maintained that Andric's discourse on the state, and national concept of Bosnian culture resulted in a distorted and extremely pretentious image of Bosniacs and thair historical destiny. lt is a characteristically ideological interpretative strategy of "spider's politics" which reduces any authentic creative act from intellectua exercise to nationalist treatise.