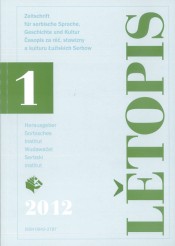 Summary/Abstract: Jurij Brězan was the most important Sorbian writer of the 20th Century, who was known above all for his novels, a genre which before 1945 hardly existed in Sorbian literature. Despite his view that his most important task was the preservation of the Sorbian language and identity, he was a significant literary figure at national level in the GDR. His two most im-portant autobiographical works, Mein Stück Zeit (1989, 2nd edition 1998) and Ohne Pass und Zoll (1999) illustrate the dilemmas of a socialist writer caught between politics and writing in the GDR who in the end gave up his belief in the power of literature to have a direct influence on politics.