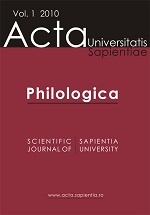 Summary/Abstract: This paper is an afterthought of a longer project on the verbal representations of Britain and Britishness in G. B. Shaw’s plays. In this study I consider the spatial revolution defined by Carl Schmitt (1997 [1954]) as a source of attitude change developed within the British cultural space towards their own island and the Continent. Verbally overt and covert aspects of the British space are considered in a series of selected Shavian plays, discussing the attitude of Shaw’s characters towards their island and their fellow-islanders, their verbal behaviour as defined by the cultural and historical space in which they exist. In the pragmatic analysis of the literary fragments the interactional microsociolinguistic method is applied, i.e. texts are considered as a sociolinguistic corpus on which the characters’ verbal behaviour is investigated.