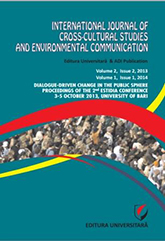 Summary/Abstract: Political rhetoric in Bulgaria after 1989 has changed as a result of political, cultural, technological, social, philological, and media factors. The participants in the protests use social networks as virtual tribunes; Bulgarian citizens broadcast their civil demands in front of virtual audiences. Civil rhetoric is an instrument to involve the citizens in the political activities, to present the requests and suggestions of the Bulgarian citizens in front of the state institutions.