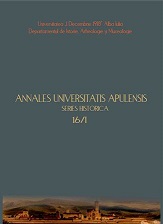 Summary/Abstract: The topic of medieval and premodern Transylvanian communication routes belongs to historical geography and landscape archaeology and it is difficult to approach it exclusively from the perspective of some categories of sources, as was the case so far. Starting from written sources, historians have dealt especially with the questions regarding major trade routes of the area, ignoring almost completely the exploration of the topic of local routes. This is the reason why the reconstruction of routes was seldom accompanied by field surveys. This article seeks to fill this gap in the case of the Râşnov fortress micro-area, where the researcher has noticed special passages carved in the rock, betraying their original destination as roads for vehicles. The investigation focused on two portions, where the wheels of carriages have created deep erosion, especially in areas of steep slope. These portions were part of a dense network of roads, covering the northern and eastern areas of the fortress, and connecting it with the Saxon town Râşnov and with some summit and valley roads running eastwards. The fortress was served simultaneously or in succession by two roads, by a road segment connecting Valea Cetăţii (Fortress Valley) with the old market and crossing on the west the end of Dealul Cetăţii (Fortress Hill), by a summit road running in the direction of the northern slope, allowing probably a supplementary communication way, outside Râşnov, with the route on Valea Ghimbăşelului, as well as a cross-road of the later, running eastwards, towards the high areas of the mountain. Each of the roads were built on sectors of steep slopes through the carving of the rock. This feature allowed the researcher to identify the tracks and to indicate them with precision on the map. Five of the roads identified in the field were indicated on the first Austrian military map of the area. This fact proves that the roads were built and in use before mid-eighteenth century, when, seemingly, the fortress ceased to be inhabited. The datation of roads for the late medieval and premodern periods considered the archeological and the scarce documentary sources. The access road through Báthory Tower dates back from the time of the building of the fortress, in the fourteenth century. The road through the southern gate was built later, concomitantly with the opening of this gate in the fortress wall and the closing of the other entrances. By the sixteenth century, at the latest, the inhabitants of Râşnov were aware of the advantages of passage ways carved in the rock. They performed this type of works for the maintenance of the Bran road, as mentioned in documents. For this reason, the author asserts that the local roads could have been built in the same period if not earlier. The technical characteristics and the traces of erosion identified in the carved passages allow the formulation of general conclusions as regards the dimension of wheeled vehicles and their standardization.